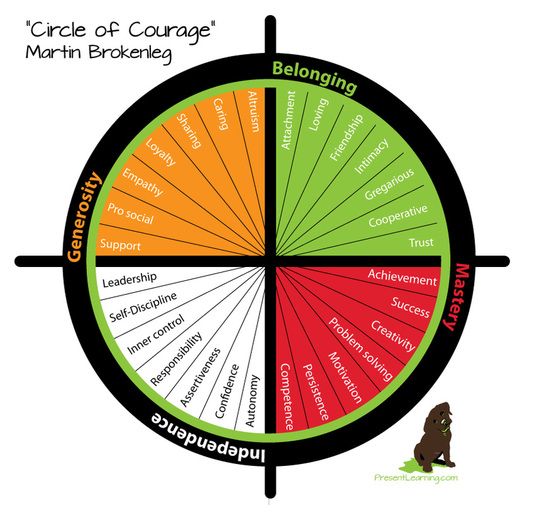 My thoughts are that the circle of courage framework is an excellent foundation for all learners, not only those who struggle. We all could learn form being more focused on the four core elements. What do they mean to you as a learner and what do they mean to the educators and education institutions that engage and nurture our younger learners . what are strategies and structure that could be used to engage all of us to work towards these elements.  The goal of Present  learning is to promote the Circle of Courage as a goal mindset for individuals and institutions of learning and to develop strategies and structures to progress its implementation and acceptance.  Positive Behavior Intervention and Support (PBIS) is a system that has adapted the core ideas proposed by the Circle of Courage framework. PBIS has used these core ideas to develop strategies that can be successfully applied  within the systemically managed learning institution that most young learners experience.
It is my thought that the PBIS has done a lot to positively change the face of learning institutions..... but the core elements of the Circle of Courage are not clearly articulated and are lost in translation. The  Circle of Courage is clear in its intent and those involved in teaching and learning processes would benefit from a strong belief and commitment to each element and be conscious of the symbiotic relationship between each core element.  Belonging, Generosity, Mastery, Independence 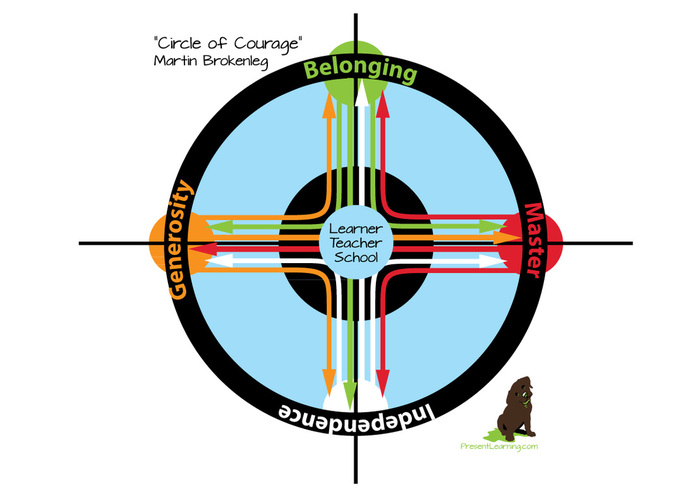 The Intertwining
These four dimensions of the Circle of Courage model are inextricably intertwined, each one responding to and affecting the others and the whole.  For example: Reaching out without taking back (Generosity), builds and maintains positive interpersonal relationships (Belonging), and teaches selfless and socially responsible action (Independence).  Others, appreciating the generous actions, invite the youngster to socially engage with them (Belonging).  Mentors or the group teach their talents, knowledge, and wisdom to the others.  Their generosity promotes mastery and independence, and models generosity. (​http://www.behavioradvisor.com/CircleOfCourage.html)
​

Taken directly from  http://www.behavioradvisor.com/CircleOfCourage.html
Belonging/Attachment:  This lynchpin character need is met by being prosocially connected to significant others; having a sense of emotional connection to individuals singly or in groups (clubs, teams, interest groups, family, supportive people).  Having emotionally healthy and secure bonds with others promotes feelings of positive self-worth, preparing youngsters to form these same nurturing attachments with decent, upright people in the future.

As Abraham Maslow (1953) pointed out in his "Hierarchy of Needs" model, after quaranteeing that physiological needs (e.g., minimal levels of food, water, temperature)are met, "Love and Belonging" needs are the next most important.  Humans have a primal need to feel valued, important, and protected by significant others in their lives... to feel comfortable and welcomed within a frequent and important group such as family, friends, colleagues, etc.  Of course, the family and one's close personal community are the most important influences on the original development of this area of self. 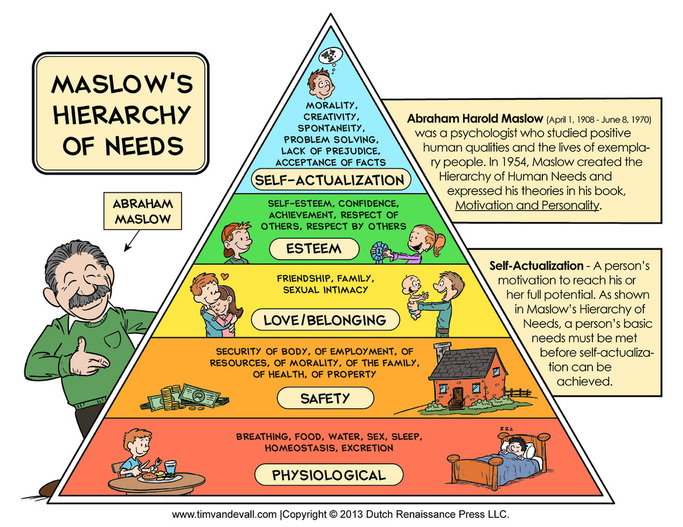 ​Those individuals who have weak feelings of "belonging" due to a disrupted or non-supportive upbringing are often able to rebuild or strengthen that area by developing close allegiances, friendships, and relationships later in their lives with positive people and groups.  However, those who do not repair that broken area of self may display one or more of many problems in relating to others.  As examples of a few misdirected attempts to "belong", they may join into or identify with negative groups that promote crime, religious hatred, disregard for the rights of others, negative use of the internet, or some other distorted views and actions.
This connection with negative influences develops in an attempt to feel important and be accepted within a social structure.  Many of these misguided youth have an absence of previous contact with positive people.  Or, they may have had repeated negative contact that oftentimes results when helping professionals become frustrated with their lack of positive impact on the resistant youngster, and strike out toward or abandon him/her.
These misdirected youth may become increasingly non-responsive or resistant to the efforts of good people and groups (including counselors and teachers)because they do not feel worthy of inclusion, or for fear of being again rejected by positive people who claim to care, but will at some point abandon their reclaiming efforts as has happened before in their young lives.  In essence, these defiant, aggressive, callous, misdirected youngsters scare off those with whom they most need and want to be connected, believing that no one could ever fully and unconditionally care for them.  That view is based on their past experiences.  They are products of their part of society.
If one has an impaired, distorted, or absent sense of belonging, it will almost certainly effect one or more of the other four areas of one's character.
​Mastery/Achievement: When one can take pride in one's competence in areas of strength, there is a willingness to undertake the learning of new skills and knowledge bases, thus making one more capable and willing to undertake more new challenges.  Overseen by mentors, talents develop in a self-managed, non-braggart type of youngster.

Those who are strong in the medicine wheel quadrant of "Mastery" feel competent in their abilities, and seek more skills and knowledge.  They are willing to fail, appear unskilled, or look "silly" when they try new things, because they see the situation as an opportunity to learn and have fun.  To them, failure is viewed as a learning experience.  Their secure self image allows them to energetically undertake tasks and activities in which they may not be fully or even partially successful.  They enjoy the challenge.  Those individuals with an impaired sense of mastery have low self esteem and holes in their self concept.  They may refuse to attempt a task for fear of failure, give up easily, be dependent on others' continous guidance in order to engage in or continue on a task, and/or may devalue and ridicule schooling or the efforts of others.

​Independence/Autonomy: Children need opportunities to develop self-sufficiency and self-governance.  This is accomplished by being given opportunities to accept responsibility, and prove oneself trustworthy.    From these learning experiences, youngsters develop the ability to self-manage their actions and make good choices.  They learn how their decisions influence their destiny.

Persons with a strong sense of "Independence" feel in control of themselves, their behavior, and their lives.  They have a well-developed sense of autonomy, and accept responsibility for themselves and their actions.  On the other hand, those who have a lessened or absent sense of independence are likely to engage in "scatter-brained" or disorganized behavior, be easily swayed by others into engaging in irresponsible or inappropriate actions, and blame circumstances/others for their actions.

Generosity/Altruism: Children need opportunities to engage in helpful and thoughtful behaviors.  By helping individuals and groups who live in their immediate world (without expectation of payment), youngsters develop and strengthen a helpful inclination.

For example, those who have a strong sense of "Generosity" (because those in the groups to which they belonged when they were young shared time, work, play, resources, and knowledge)are empathetic toward others and want to help others.  They give of themselves or their possessions in various ways.  They truly have the "joy of giving", receiving pleasure from helping others in need.  Folks who have a distorted or absent sense of generosity might display behaviors described as "stingy", "callous", "uncaring", and lacking in concern for the welfare of others.  They "take" rather than "give" (absent quadrant of Generosity) or show their malformed sense of generousity in odd ways (e.g., being overly giving due to feelings of obligation). 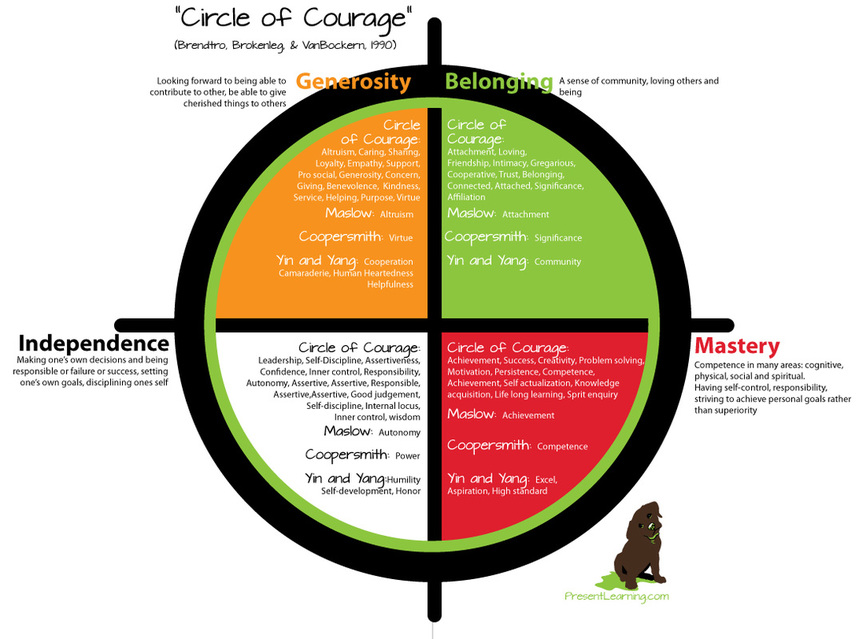